The Maryland Flag: A Legacy America Can Be Proud Of

The Maryland Flag holds rich family legacy. One source describes the Maryland Flag as one of the most perfect state flags with, “bold colors, interesting patterns, and correct heraldry—a flag that fairly shouts ‘Maryland.’” First flown in 1880, and adopted in 1904, the Maryland Flag has been proudly displayed for over 135 years.

One of only four U.S. state flags that does not contain the color blue, The Maryland Flag’s design is regarded as one of the top in our nation. In fact, a 2001 survey placed Maryland's flag fourth best in design quality out of the 72 Canadian provincial, U.S. state and U.S. territory flags ranked. This uniquely designed and distinctively colored state flag was officially adopted by Maryland in 1904. The unique black and gold design in the upper left and bottom right of the flag is George Calvert’s (Lord Baltimore) coat of arms. This honor was granted to him as a reward for storming a massive fortification during battle. The vertical bars represent the bars of the palisade he stormed.

The cross bottony with the red and white sides of the cross alternating in the upper right and bottom left is based on the coat of arms of the Crossland family, specifically Lord Baltimore’s mother, Grace Crossland. A design that quickly became known as the “Crossland Banner,” gained popularity during the American Civil War when the Marylanders who supported the Confederacy adopted the Crossland Banner in the flags, devices, and uniform pins of the Union Army.

At first, only the gold and black Calvert arms were associated with Maryland, being reintroduced in 1854. What many fail to mention is that since Calvert’s mother was a heraldic heiress (a daughter of deceased man who was entitled to a coat of arms and who carries forward the right to those arms for the benefit of her future male descendants), Calvert was entitled to use both coats of arms in his banner.

The Maryland Flag was first flown on October 11, 1880, at a parade marking the 150th anniversary of the founding of Baltimore, and in 1904, was officially adopted as the state flag. On on October 25, 1888, the flag was seen at the Gettysburg Battlefield during ceremonies dedicating monuments to the Maryland regiments of the Army of the Potomac.

As you can see, the Baltimore Ravens logo is in the shape of a badge, with the red and white cross buttony on the bottom left, while the gold and black Calvert pillars take up the top right. 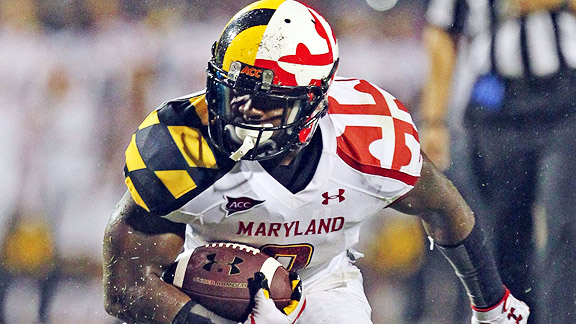 The University of Maryland specifically designed their home jersey so that each player proudly contrasts the cross buttony and gold and black Calvert arms with their white helmet and shirt. Our version of the Maryland Wood Flag has raised elements providing a distinctive 3D look and feel. Each wood flag is replicated to match the flag’s true colors and dimensions. As you can see above, our Maryland Vintage Wood Flag has a weathered look. Because some enjoy the character of an aged or antiqued wood flag, we’ve decided to make this special edition available to all our customers. For America, there’s rich a history and legacy behind the the Maryland Flag—one that we could only touch on in this post. But you can relish in the legacy with our Maryland Wood Flag. The grain of the wood, the boldness of the colors and the raised elements will provide a conversation piece that all your friends will rave about.

Show your pride of America’s history and order your Maryland Wood Flag today.